Life in the fishing village of Nagpali.

It is a village where I had already come to take pictures in 2016, but this year I returned for a visit with one of its inhabitants. 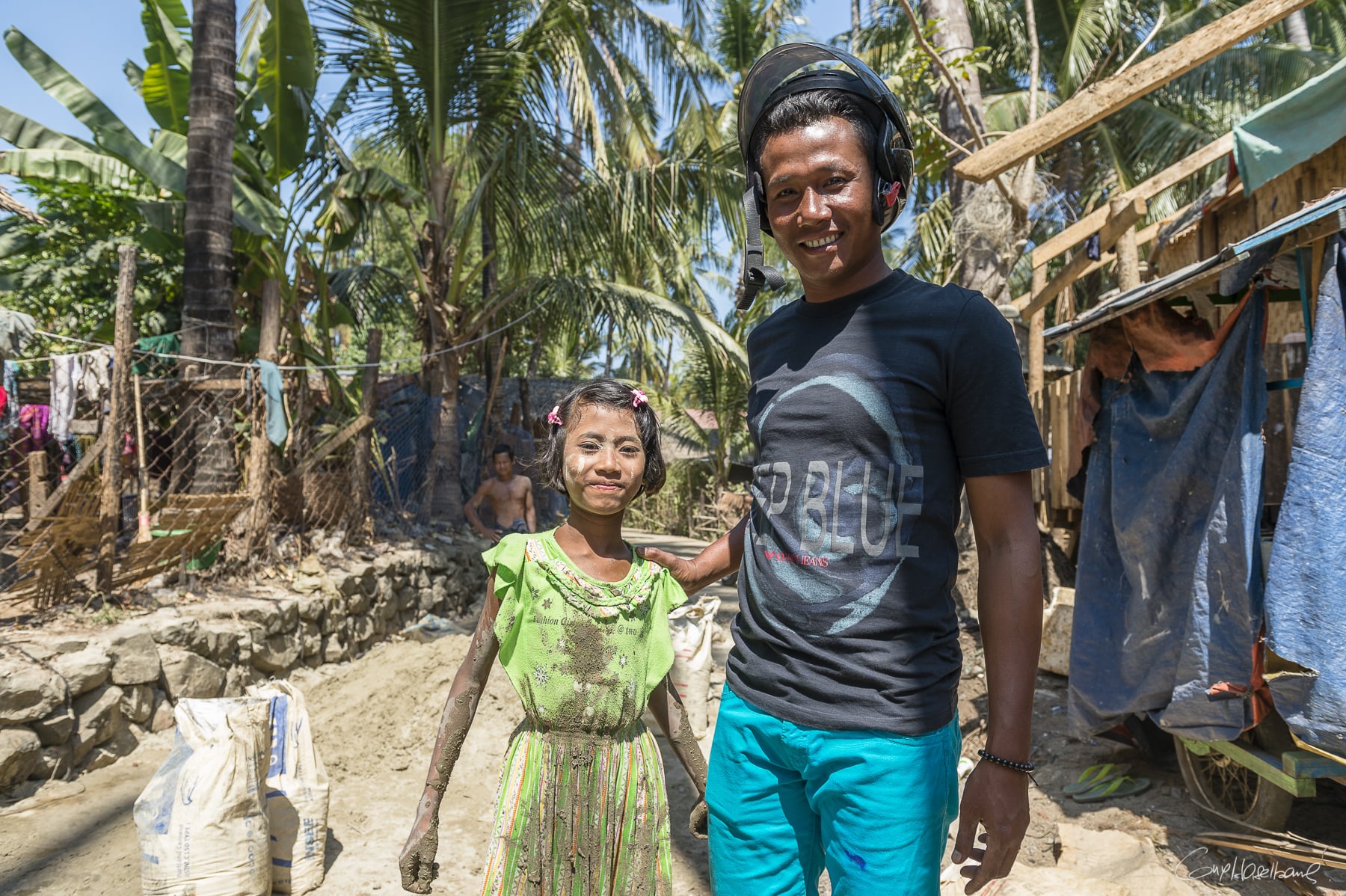 “Mister Kyaw” with a girl from the fishing village of Nagpali who is helping to build the alley.

I like to meet simple people, not complicated, it dispenses me of myself. The word “simple” is not pejorative, it is rather the opposite. Kyawmino is one of those people and he’s a charming boy. About 26 years ago. I met him last year at a restaurant on the beach looking for a boat to see the night fishermen at the lamp. He organized this trip at sea which allowed me to live a unique experience: Spend a few hours (to see the article click) alongside fishermen in the Bengal golf course.

I remember that at the time of our transhipment, I lost a little balance because of the swell and the desynchronized movements of the two boats, with these people you have no risk of going into the water, they Watch over you very closely and protect you as has often been the case for me in Burma.

I went back to see him at the restaurant this year to rent a motorcycle, then we met again several times the following days. Today he offered me to see his village. 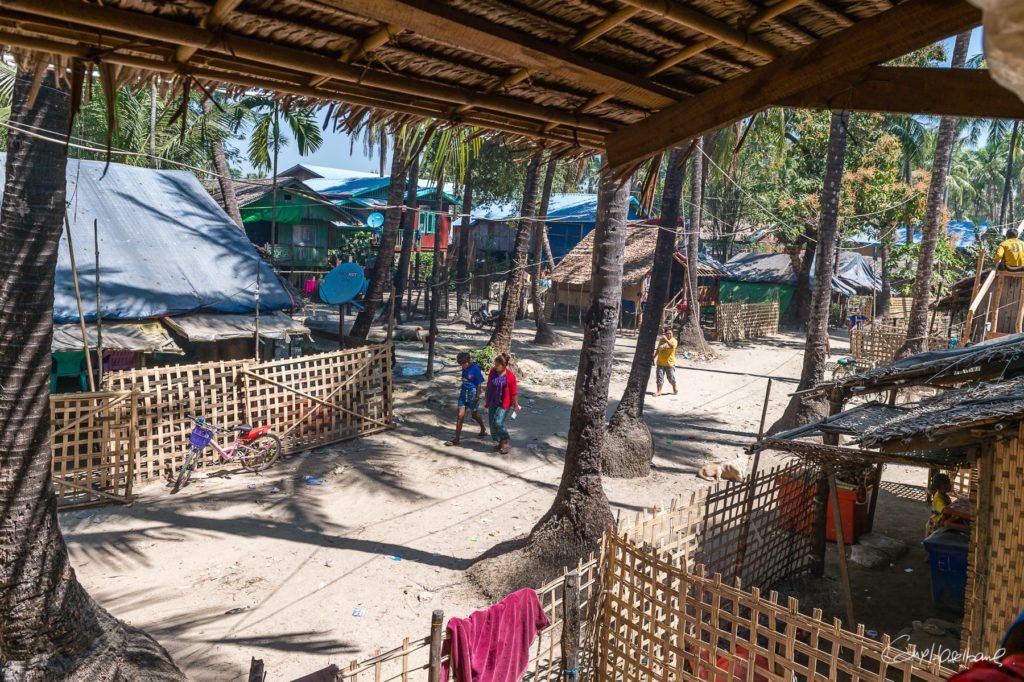 The fishing village of Nagpali.

This fishing village has about 10’000 inhabitants, I would have estimated “at sight of eye” its population to 2’000 inhabitants approximately. This means that its density is high.
It is “Mister Kyaw”, as he sometimes calls himself, who offered to guide me in his village. This interests me because it is my fifth stay in Nagpali since 2000 and I have never had this opportunity to visit “private”. The first step is to go see his parents with whom he still lives. He is not married and questioning him on this subject he answers me that the priorities for him are the studies of his brothers, his future and his professional stability, before committing to build a family. He has two or three brothers and by showing me their pictures hanging on a wall, he explains to me proudly that he helped them by paying part of their studies in Yangon. His father is about 73 years old, he no longer fishes but continues to work by repairing the nets.

At random of the discussion he tells me that he is appreciated by all in his village. I asked him “why?” Very interested to finally find the instructions, and he replied that he does not really know why, but adds, “because I work everywhere helping others, fishing, I walk tourists, Help at night in a restaurant to volunteer to gain experience. ”

Kyawmino is a kind of pearl surrounded by fishermen. 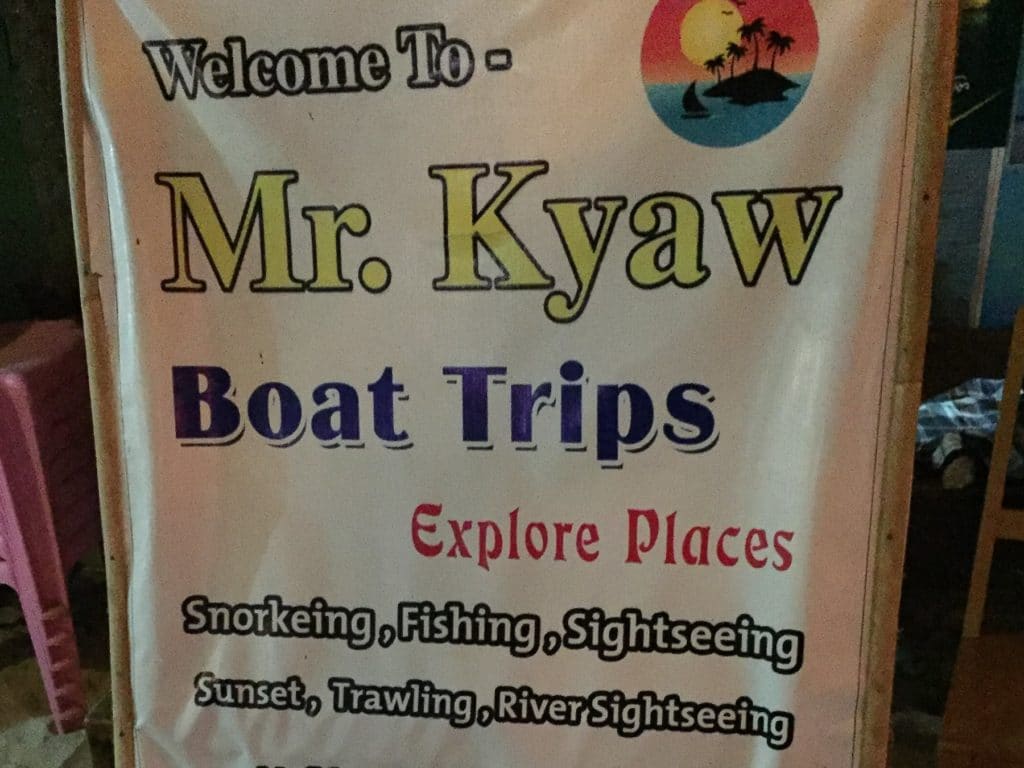 With the tourism that is developing strongly in Nagpali in the State of Arakan, He wants to develop a “boat trip & snorkeling” activity but he understood that it is absolutely necessary that it is present and well referenced in Tripadvisor for To make itself known to its future customers-tourists. So he has already begun to make business cards and a billboard in front of the beach restaurant where he works from time to time.
One night we went on a motorcycle to the airport where the sunsets were spectacular, we took two bottles of “Myanmar beer” and sat on the rocks. Here with the generalized good weather, it is the spectacle assured every night. I tried during this time with his phone and internet to open an account on Tripavisor, in vain, until nightfall, I did not succeed. Upon leaving I promised to try to make his page “tripadvisor” remotely. 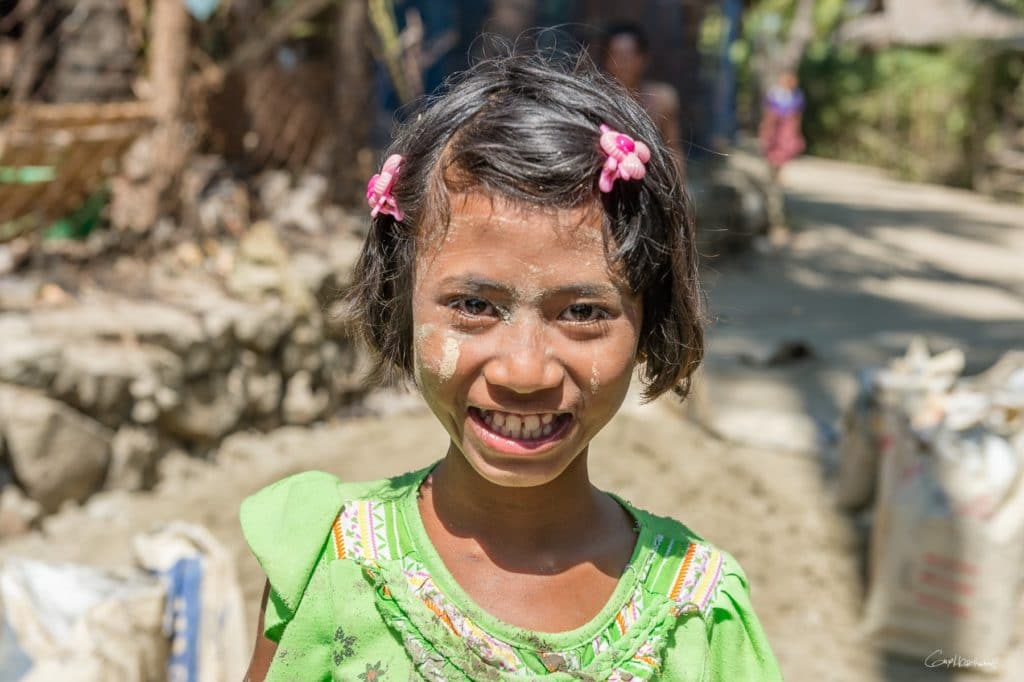 Girl from the village helping to build the road.

He explains to me by passing in front of certain water points in the village that there are very few public facilities here, that there are non-potable water points and other places in the village. New water points that the government has built relatively recently for drinking water. The street has been concreted recently but it is the whole village that participated in the financing and helped the construction. Even children participate in this construction by seeming to have a lot of fun. In this village there is a fairly developed community spirit.

He tells me that during the rainy season these streets can become dangerous. The nuts of coconut trees when there is wind sometimes fall by cutting the electric wires hanging artisanally which are found on the ground in puddles of water and as the street is not illuminated the risk of electrocution is important. We meet a man apparently drunk and Kyawmino then tells me about him that he started drinking when his wife left long ago and he never recovered. For Kyawmino, he does not imagine living such a fall for a separation 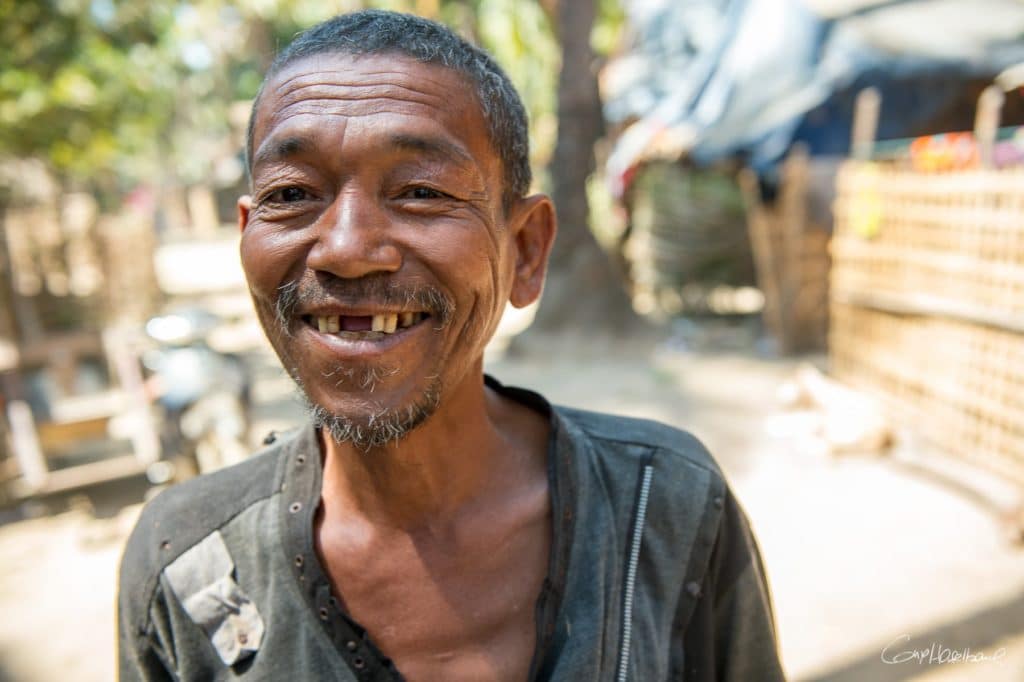 Then we pass the house of its neighbors. They are all eating in front of the house and have invited other neighbors who are helping to build a new house next door. It is the tradition here mutual help between each family. 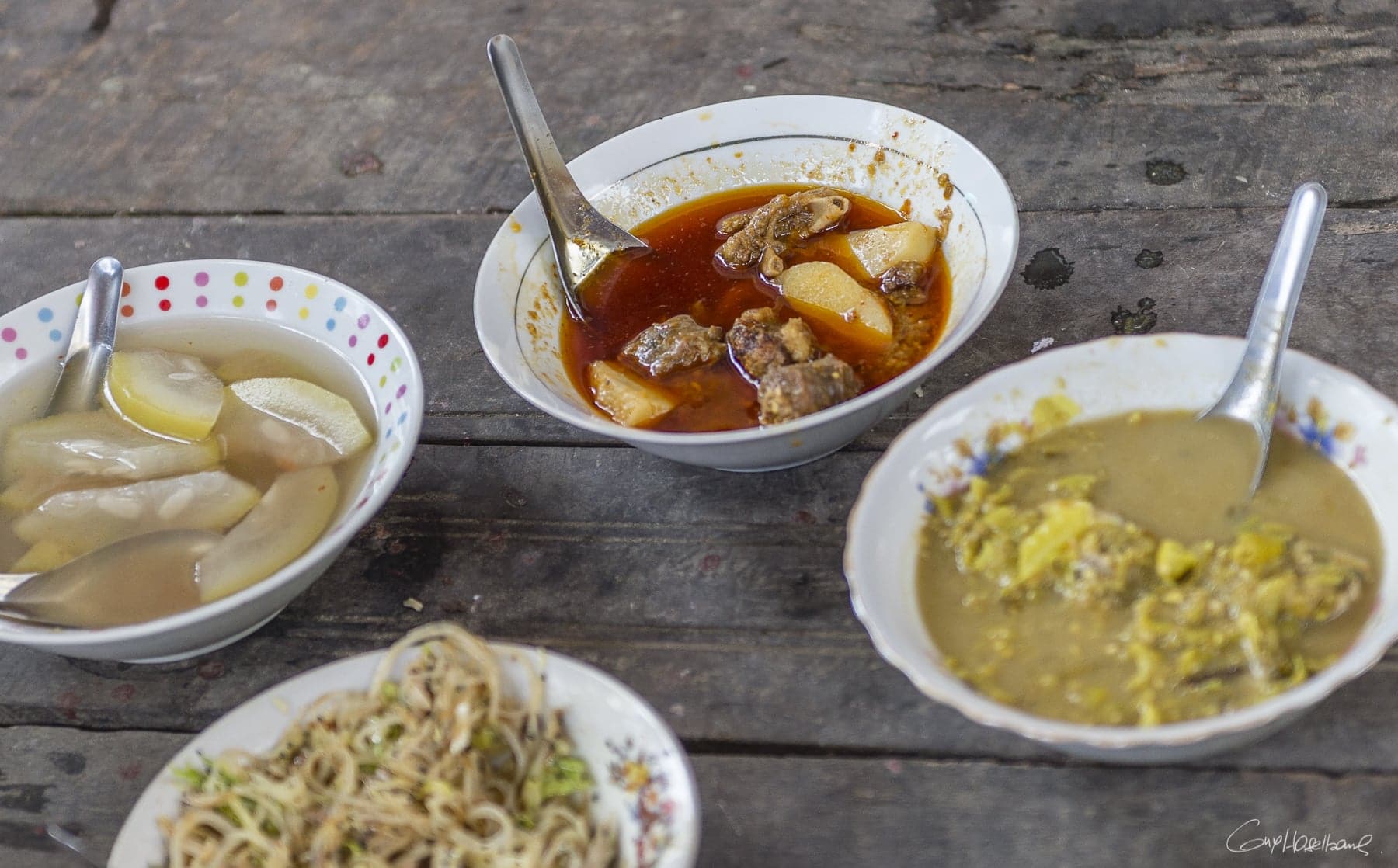 Meals of the guests.

We will then see the port south of the village. The bags of crushed ice to keep the fish are loaded onto the boats. Some large boats leave off for several weeks and freeze their cargo of fish.

I would go and see tomorrow the little ice factory that delivered these fishermen. 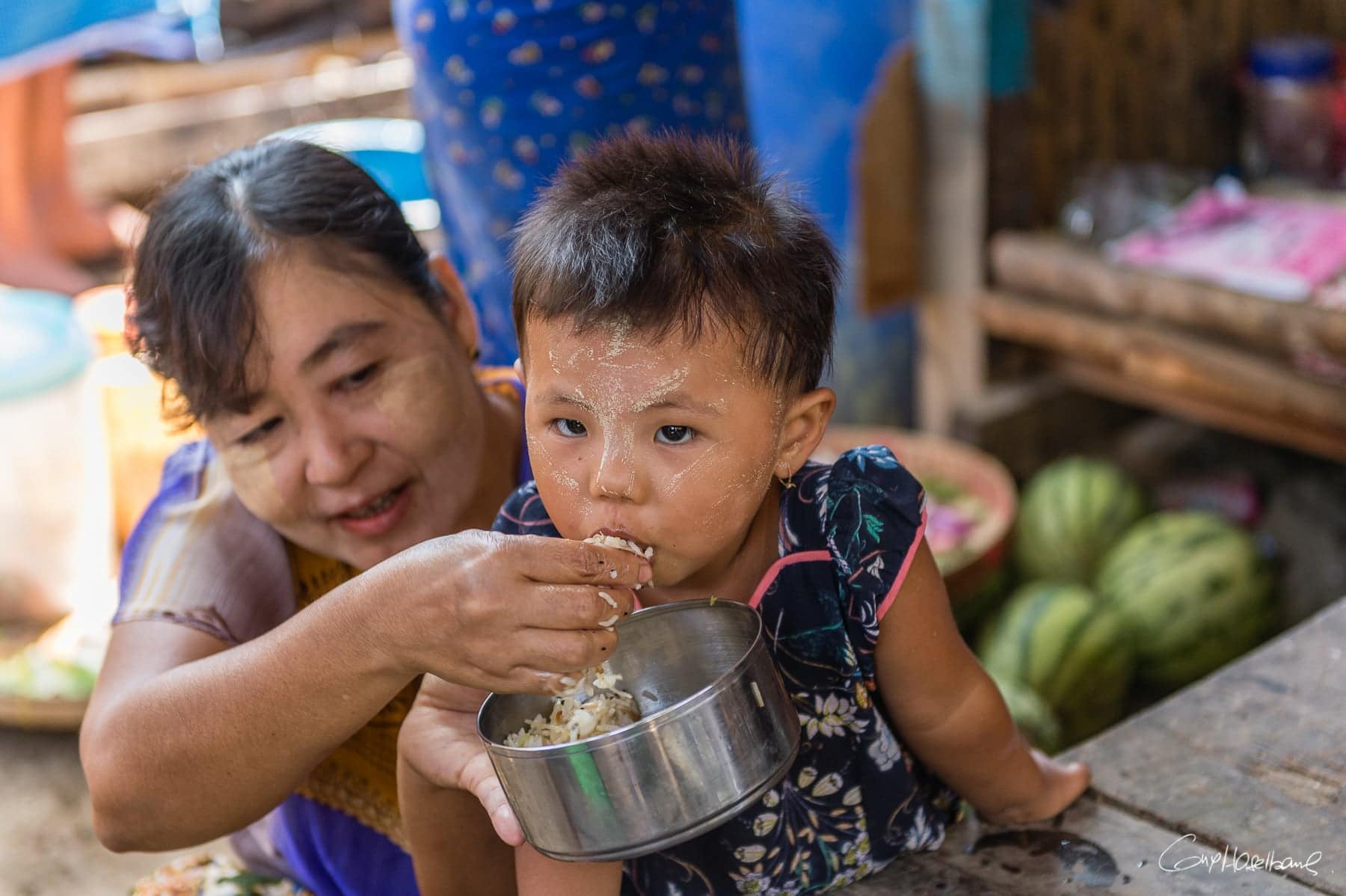 Life in the fishing village of Nappali. 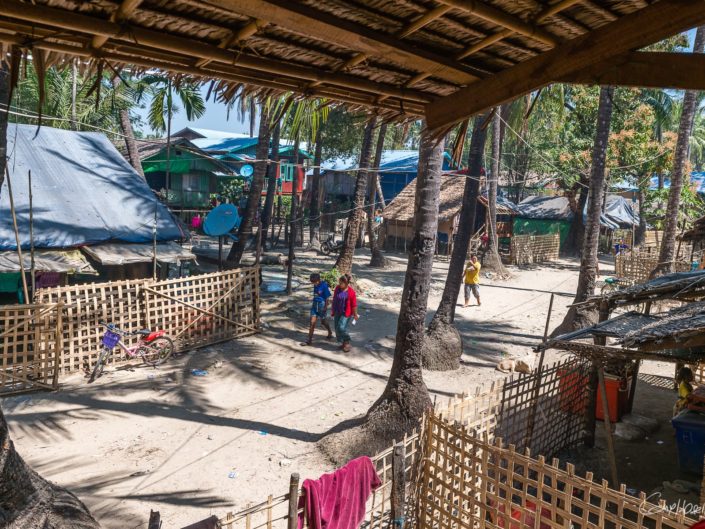 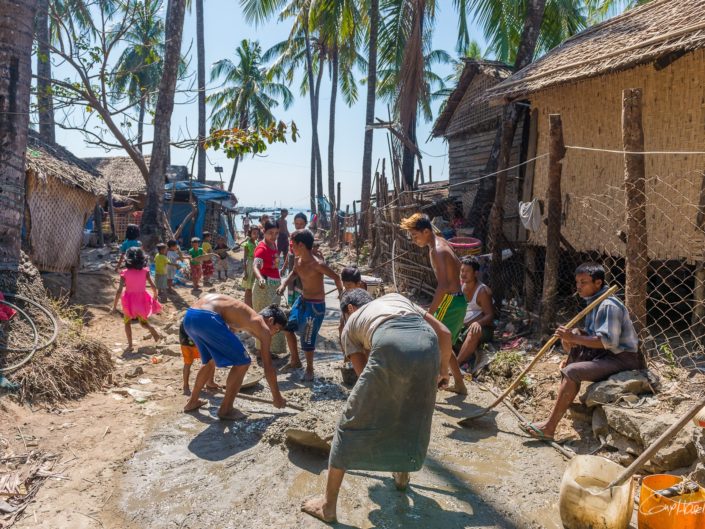 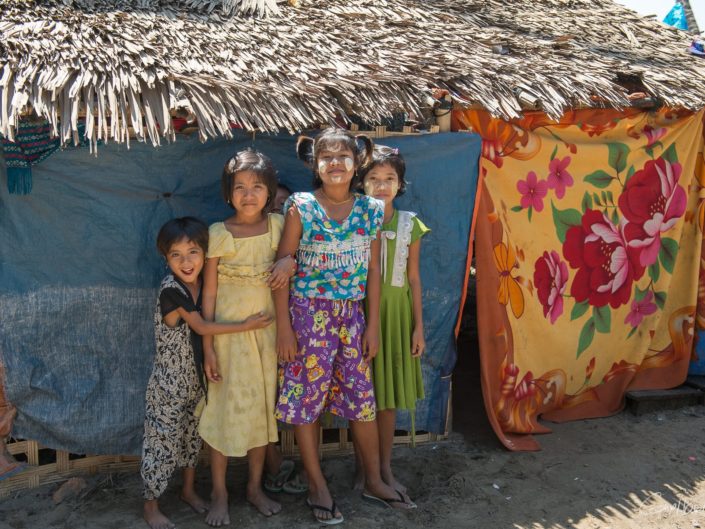 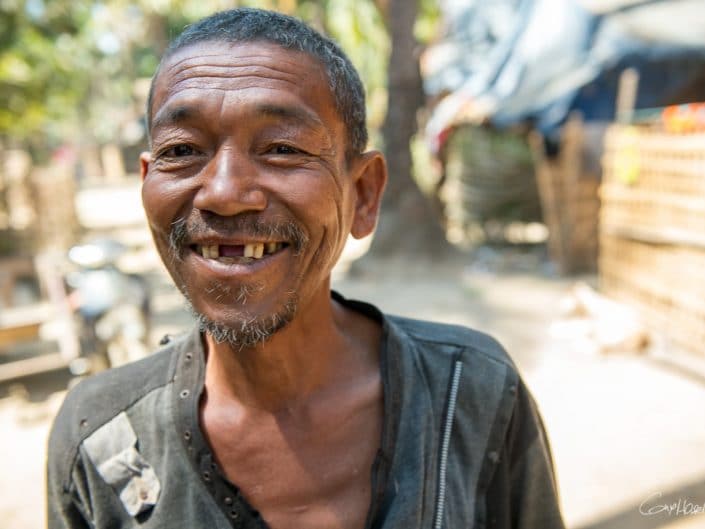 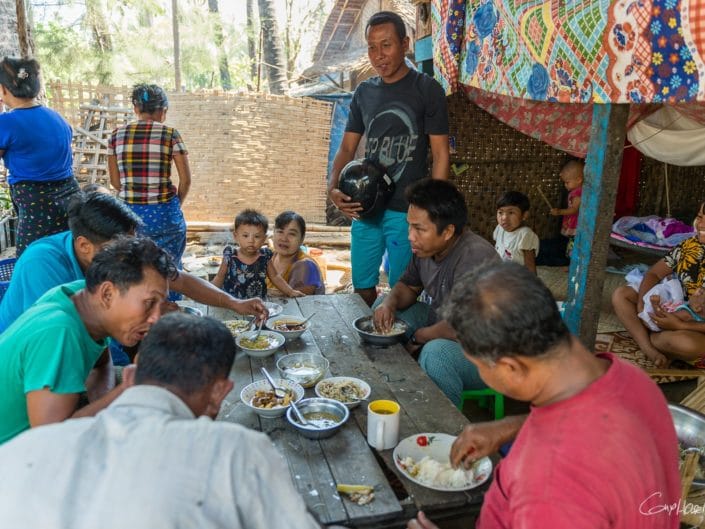 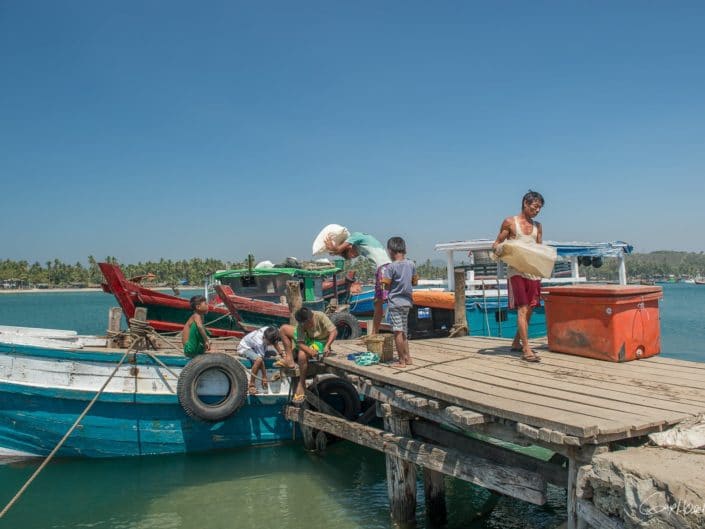 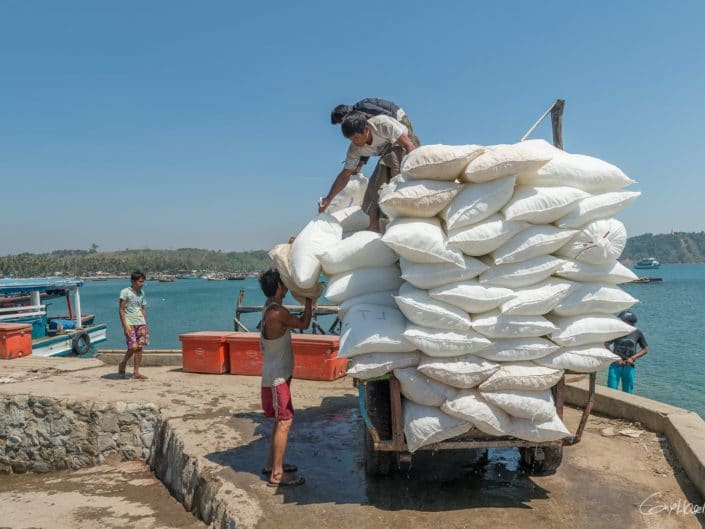 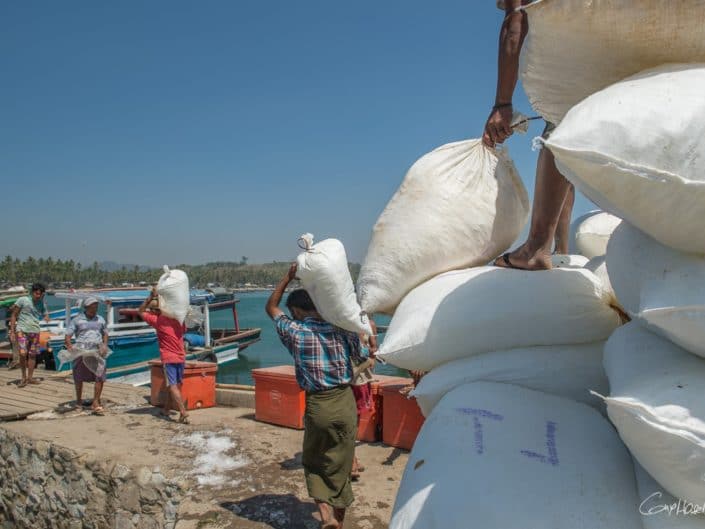 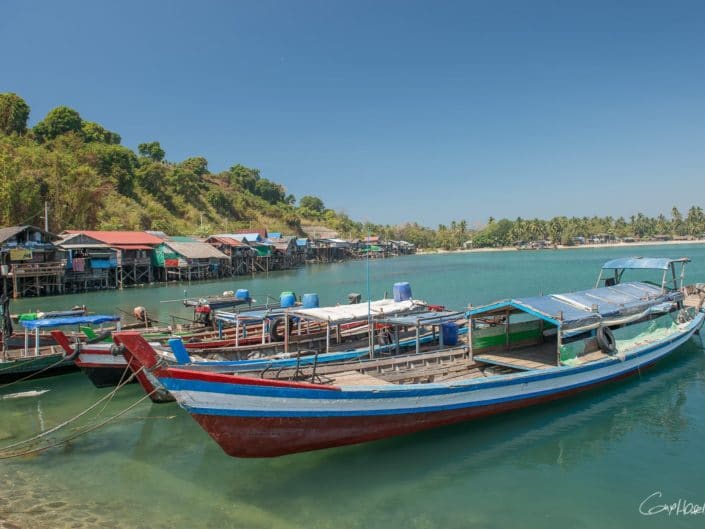 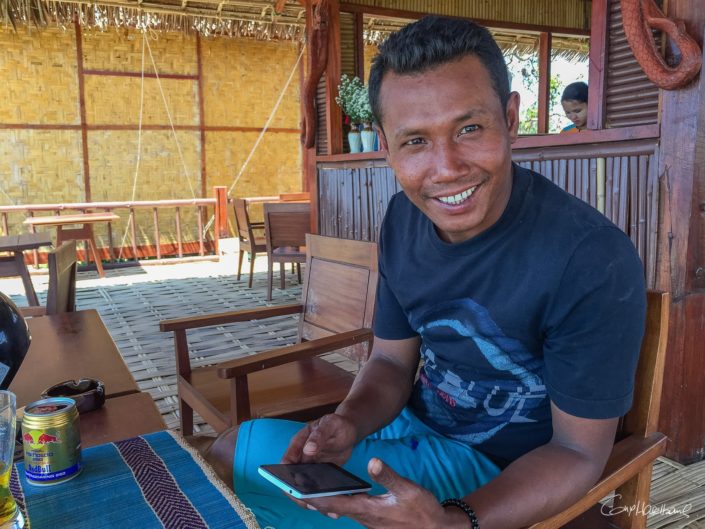 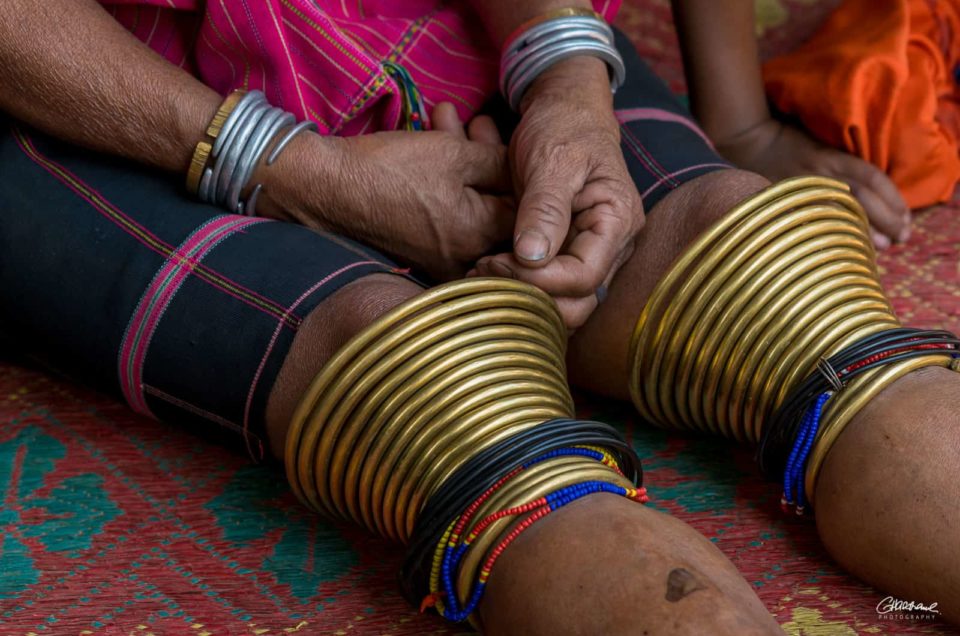 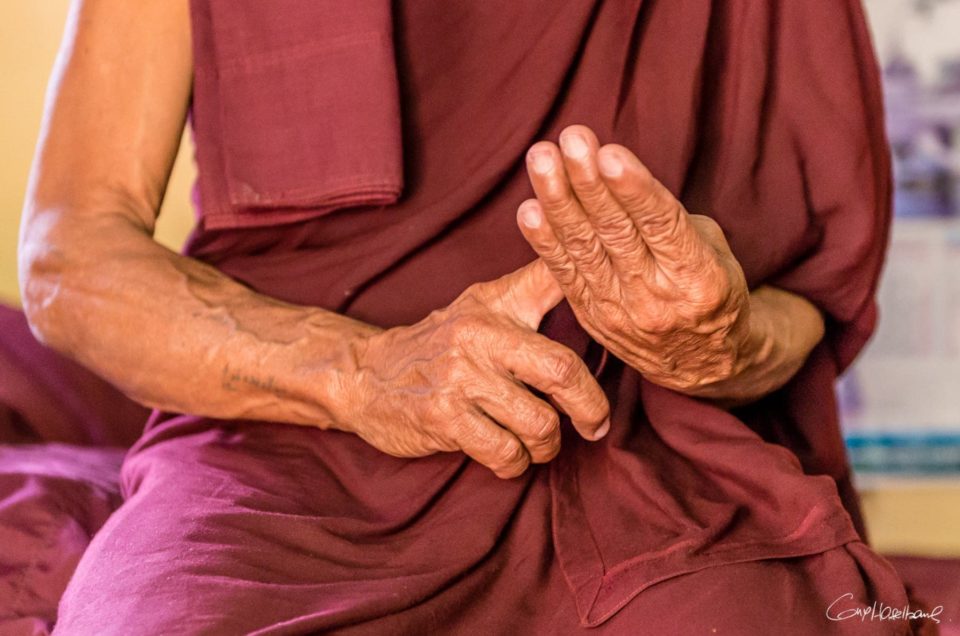 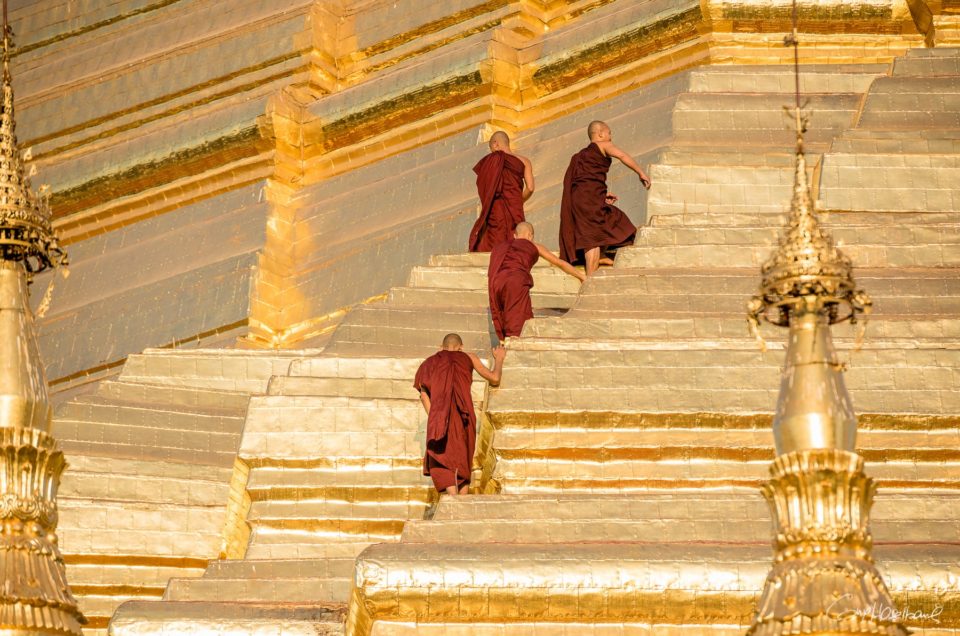